Note: this is a backup website for README.md in original repo.

The following results are under the condition of 10 iterations, averaged perceptrons and a tag set {'B', 'M', 'E', 'S'}.

Most of the implementation is based on the NLP lecture slides such as Viterbi algorithm. Unique features are listed as below.

For example, bigram 北大_B should be 北大_mn_B, m stands for middle and n stands for next, in order to distinguish it from 北大_pm_B (p for previous).

Note: No position information is attached to the trigram as only is involved in unstructured perceptron.

It will cost unacceptably much time if we use list in Python as vector to do the calculations. Here I have used a dictionary to map a feature to its weight, and only calculate when a feature has been recorded in the dictionary.

Averaged perceptron improved F-score of unstructured version from 0.90 to 0.93. But as what I said above, if we just add the vectors, calculate the sum and divide it by the total number, it’s just too slow. The pseudocode is as below.1 It’s of course inefficient. I first tried to count the total iteration times and decrement it as a weight factor (just opposite to the one below). Fortunately, I found a more efficient algorithm on the Web:23 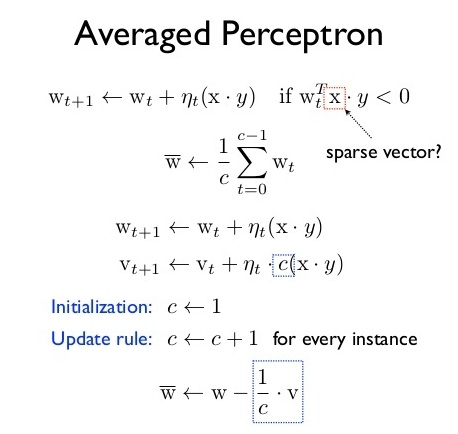 After being averaged, the unstructured version improved F-score to 0.93.

Simply repeat iterations and the result will be better until convergence. In the unstructured version, the F-score converges to 0.948 after 10 iterations .

Be careful that averaging operation should be done after all iterations end.

My original code is:

But 'B' was not considered, and then I use the following:

Like regex, we use ^ as begin mark and $ as end mark. For example,

Now we can avoid considering the first and last characters and unify the operations, which is a small trick.

At first I didn’t think of writing any class. Later I found code too messy and wrote a Percept class to include functions of perceptron. And some other code prettifications.

Consider grams that appear more than once

Some unigrams and bigrams just appear only once in the training data. Therefore to improve training efficiency, we can ignore those grams. To do this, I import Counter from collections:

At first the sizes of files that store the dictionary and weight vectors are as large as 100-300 MB, which is quite costly in memory. Hence I use readline() instead of readlines() to slash down its memory occupation.

I set up a dictionary to map features to its index in the weight vector, and stored weight in a list. It’s just a waste of space, as weights could be directly stored in the dictionary, which I call ‘weight vector’.

The original weight vector file is quite large, however most of the stored features have a small impact on the result of segmentation. Actually, it’s a ‘sparse vector’ and almost 90 percent of it can be cut off.

I use 1e-1 as the threshold and only features whose absolute value of its weight is larger than the threshold will be left. After compression, F-score of unstructured perceptron decreased only by 0.001 to 0.952, and the structured one remained the same as 0.964. As a contrast, file size decreased from 330 MB to 48 MB.

Special Improvement from Unstructured to Structured

In the lecture slide, only is listed as edge feature. After I implemented structured perceptron with the feature added, F-score rose to 0.962.

Then I think of combining edge feature with original node features. Here take and as an example. They’re node features now.

Consider a first-order Markov process. Instead of adding a single to the set of features, we add the ordered pairs and each of which is a combination of a node feature and an edge feature. Notice that for 4-tag set 'B', 'M', 'E', 'S', there would be totally 16 times features as before. Therefore it will surely cost much more memory and time to work out the result.4 In fact I have to remove trigrams in node features, otherwise memory limit will be exceeded and OS will subsequently crash down.

As a result, after combining node features and edge features, the final F-score rose to 0.964.

Note: Since the files that store weight vectors exceed the file size limit of GitHub, I have to compress them in .zip format. Hence the directory tree below may not be consistent with the present one on GitHub.

Descriptions of the files:

Note: Though it’s alright to run any Python program on any platform, it’s recommended to run on Linux distros, since the following commands are all based on Linux CLI.

Switch between structured and unstructured version

git is used to help to manage versions during development, which should have been built into most Linux distros.

Parse sentences in train.txt. The parse function in the file returns a tuple composed of a string without space or newline character and a list that indicates the tags for each character in the string.

get_gram function get unigrams, bigrams and an optional trigram for ith character in the sentence.

Initialize an untrained weight vector from train.txt with get_init_vec function. It extracts features from the file and return a dictionary that maps features to weights which are set to 0.

Import functions from the files above and run. You can use the trained weight vector directly or uncomment certain lines in __main__.py to train from zero.